Taking an olfactory tour of Acqua di Parma’s Blu Mediterraneo fragrances recently re-inforced for me the notion that fragrance is often the ultimate travel agent – whisking you off to far flung places with the merest hint of sage or whiff of tangerine. The Blu Mediterraneo range now takes in everywhere from Calabria and Capri to Amalfi and Sicily and the latest addition to the range, Ginepro di Sardegna aims, as the name suggests, to capture the essence of the beautiful island of Sardinia. 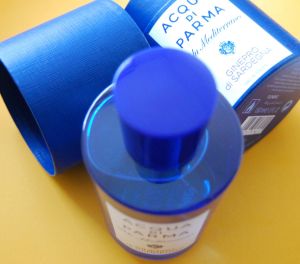 With that in mind, it puts at its core a sparkling gin-like juniper note (the juniper bush flourishes on the island), then adds sage, pepper, pimento, bergamot and cedarwood. The result is a fragrance that’s spicier, warmer and altogether more ‘eveningwear’ than some of the other fragrances in the range and also one that’s a touch more mainstream and commercial. Well worth a sniff, particularly with summer on the horizon.   Available now from House of Fraser