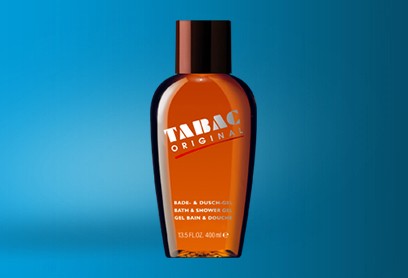 Just a quick post to thank make-up artist extraordinaire Daniel Sandler for taking me on an olfactory journey back to my youth this week. Whilst having a drink with me the other night he produced a small gift  – a bottle of Tabac Original Bath and Showel Gel, which he’d acquired at his local chemist. Now, without giving away too much about our ages, Daniel and I are ‘contemporaries’ and he too remembers the very distinctive smell of Tabac from his youth.

Originally launched back in the late fifties (no, that’s absolutely not the decade we remember it from in case you’re wondering) Tabac has had several resurgences in popularity, principally in the Eighties. To be honest, I’d actually forgotten it even existed anymore until Daniel and I were discussing fragrances from our misspent youth a few weeks ago and it came up in conversation (hence the gift). And the moment I got a whiff of it I was all of 15 again  – with hair and a 28 inch waist and all!

If you’ve never encountered it, it’s a fantastically old-fashioned florally fougere fragrance with notes of neroli, lavender, geranium, sandalwood, oak moss and ambergris. Somehow the shower gel smells just how a shower gel should and the fact that it’s  around all these years later (and probably will be in another 40 years) is a sign it’s still doing something right, so why not give it a whirl?