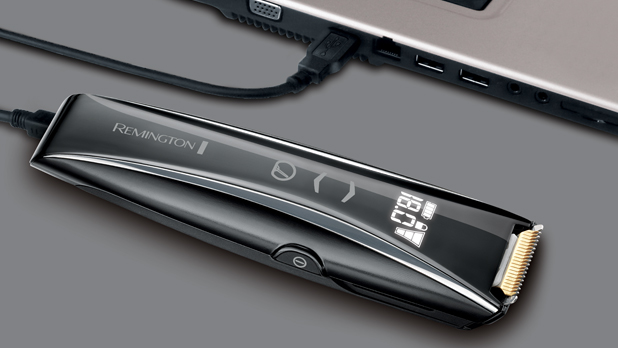 Nobody knows more about beards than me. I’ve had one (if you can call my patchy approximation of one a beard) for over ten years now – co-incidentally ever since the hair on my head parted company with my scalp. And what I don’t know about beard trimmers ain’t worth knowing. I’ve tried them all, and the one I use myself is a trusty old Remington MB320C (snappy name huh?). It’s robust, easy to use and, crucially, manages to get into those difficult-to-trim places like under our nose. I’ve had other trimmers that break, snag or simply can’t manage to do the job properly but this one is great.

But now there’s a new kid on the block – the Remington Touch Control trimmer – the world’s first beard trimmer to feature a touch screen control technology. Given how everything is touch control these days I suppose it was inevitable that trimmers would be too.

So how does it rate? Well, it’s a sexy old thing, certainly much slicker than my old model and the big advantage is that the touch control allows for precision length control (unlike the 1 – 7 settings of old). In fact, you can move it in tiny 0.1mm increments, allowing you a whopping 175 length options and making it pretty much the ultimate in bespoke beardage.

What’s more (and this is a massive plus as anyone who’s ever used a beard trimmer will know) there’s a locking function which means the settings won’t accidentally alter mid-shave. You can even vary the speed of the shave and it can also be powered via your computer’s USB. More importantly, it delivers a great trim so I think the Grooming Guru can confidently declare Remington ‘Best for Beards’!

The Remington Touch Control is available from all leading retailers priced £59.99

Grooming Guru Essentials are the products I genuinely love and have used as part of my own routine.