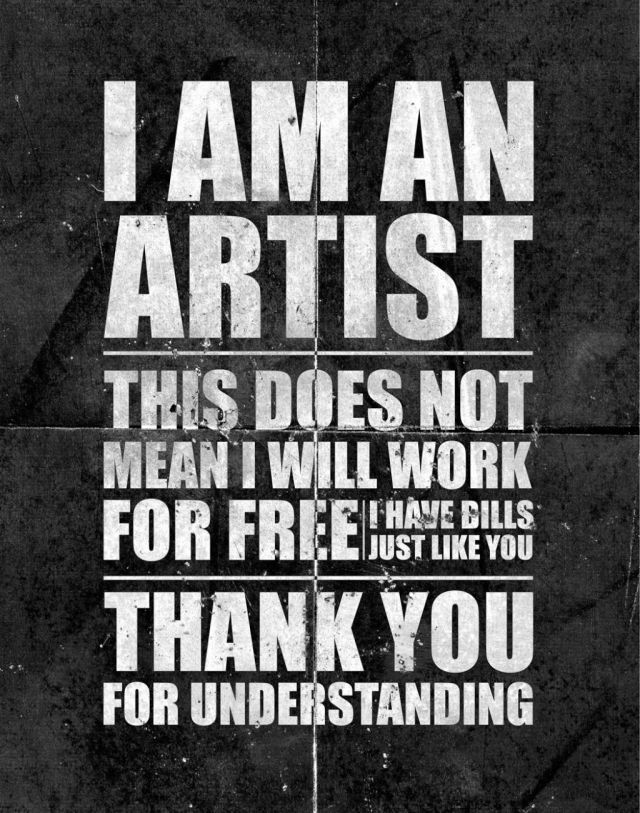 It’s a dilemma facing every wannabe journalist or writer looking for a foothold in what is a notoriously tough and fickle industry: do you offer your work for free?

As a journalist I’ve only ever really been asked to work for free once professionally (more about that later) but as a blogger it’s a regular occurance. The typical scenario goes something like this: I get approached by someone who’s discovered my blog or stumbled across me on Twitter and they have something they’d like me to help them with. Some say they’d like to “collaborate” with me but I’ll vent my spleen about that term on another day. Anyway, we talk and they’re all over me like randy pup. I’m just the person they need! Then, when they twig I actually make my living from writing (and therefore require remuneration) they’re off my quivering leg like lightening.

But it gets worse. A couple of years ago I was contacted by the online editor of a publication asking me if I’d be interested in writing for their website as they were looking for good male grooming content. He knew I was a journalist and since I’d never written for this particular publication I was keen to contribute, so my answer was an enthusiastic yes. After sussing out what kind of thing he was after and agreeing that I could provide it I then asked what the payment would be.

The reply, although meant to be funny, actually took me aback. “Oh, you’re one of those old-fashioned journalists who likes to get paid!” he said. Given that I’ve been a journalist for over 20 years and have managed to earn a decent living out it (no mean feat given what a poorly paid profession it can be) I was pretty gobsmacked.

Of course, the moment I said yes to his question, I never heard from him ever again. He got his copy, though, and presumably for free, from elsewhere. Don’t get me wrong, not every single piece of work I’ve ever written has been paid for. I’ve done work for friends as favours or as part of contra deals and I wrote for free very briefly when I was doing work experience, back in 1990. I started out at 19 Magazine (ironically, a title I eventually ended up editing) and though I wrote a couple of small pieces without payment on a two-week work placement the features editor at the time – one of the best I’ve ever come across – eventually decided she should pay me for the words because she rated what I was doing.

There are, of course, many great commissioning editors and content managers out there but there are also also plenty of predatory ones essentially looking for writers to groom. Bloggers, in particular, are easy prey. I’m a curious breed of blogger known as a jogger. Half journalist and half blogger I’m the writing word’s equivalent of the bisexual – and treated with just as much suspicion. Since I was a journalist first, though, I’m pretty savvy about how things work when it comes the industry but I don’t suppose everyone is.

These days, many aspiring writers see blogging as the perfect launchpad for a journalistic career. And why not? Self-publishing has never been easier nor more respectable. The problem is, if you’re starting out and someone comes a long and asks you whether you’d like to write for them you’re naturally flattered. You see an opportunity to get your work out there. They won’t pay you? Fine, it may lead to something where you do get paid. Trust me, I get it. Like seeing a tray of doghnuts in a baker’s window, it’s a proposition that’s hard to resist. And the people offering you the opportunities know this.

Please understand that I am not having a go at all the aspiring writers out there – I was one myself once – it’s the unscrupulous people who expect them to write for free. Often these people work for websites or retail sites who are clearly making money. They’re businesses so they understand that everything comes with a cost attached. Except you of course.

What irks me about the website I mentioned earlier is that though they wanted copy for free the person that contacted me is quite clearly salaried. That website pays its staff so what makes its staff think they don’t have to pay its contributors? Wanting writers to write for free is shameful, disrespectful and frankly, turns commissioning editors into little more than petty thieves.

The problem is we live in a world where skill and creativity are have been undermined and devalued. It’s easy to blame the internet for this. Most of us expect content for free these days after all. But at the end of the day, businesses have a choice and they should choose to allocate budgets for ‘talent’. I totally understand that many start-ups don’t have huge amounts of cash to splash but I do believe that even if they can’t pay their writers the going rate they should, at the very least, offer them something for their work. And I think that all the writers out there have a duty to at least ask for something, otherwise they are doing themselves, future writers and indeed, established ones like me, a real disservice.

What made the features editor at 19 who offered to pay me for the pieces I wrote at the very start of my career so special is that she put a value on my work. And by valuing my work she she put a value on me too. If you constantly give your stuff away for free you’ll, quite literally, end up feeling worthless. So my message to budding writers is never sell yourself too cheaply because, to adapt the tagline L’Oreal are so fond of using, you’re absolutely worth it.

PS. Thanks to Guy Clapperton for pointing out this brilliant video after I wrote this post. If I’d have seen it beforehand I would have just posted it on here instead!

12 thoughts on “Free for all: why selling yourself cheap is ultimately self defeating”