Gargle Using a mouthwash doesn’t just freshen breath it dislodges trapped particles of food. What’s more, if you use a product like Dentyl Active Ultra Cleanse (£4.38 for 500ml from boots.com) which contains an antibacterial ingredient, it’ll stop bacteria going to work afterwards too. Opt for an alcohol-free one. “Not only has alcohol been linked to mouth cancer, it dries out the mouth too making you more likely to get bad breath,” says Dr Uchenna Okoye, Clinical Director of the London Smiling Dental Group.

Go interdental Brushing’s all very well and good but it can leave up to 40% of your tooth surfaces uncleaned and it’s often the gaps between teeth that harbour odour-causing bacteria and decaying food. Yet according to a Listerine survey over 18 million never floss. If you find flossing  fiddly Okoye recommends using a pre-loaded picks like Crest Glide Floss Picks (£3.99 for 20 from amazon.co.uk) which spare you having to wrap the stuff around your fingers.

Kiss. Or chew According to a study by the Academy of General Dentistry a bit of tonsil tennis may be able to prevent tooth decay and minimise bad breath by stimulating saliva production – saliva being a natural source of bacteria-busting enzymes. If you’ve nobody to snog try chewing some sugar free gum like Wrigley’s Orbit Complete with xylitol, 69p from tesco.com. “Ones containing Xylitol are especially good as it actually slows down growth of bacteria,” says Okoye. It’s not as much fun as kissing, obviously, but works just as well.

Go for tongues In most cases 85% of cases bad breath actually originates from the tongue not the teeth or gums. “The tongue has lots of grooves and crevices for bacteria to lurk on so clean it regularly,” say Okoye. You can use your toothbrush but the best way to remove bacteria is with a tongue scraper like Oolitt Excel Tongue Cleanser, £3.56 from amazon.co.uk 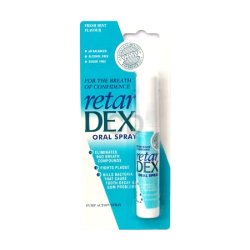 Spray don’t pray Lots of things can help you prevent bad breath when you’re on-the-go (Okoye recommends chewing on cardamon pods or fennels seeds) but if you’re looking for an effective pocket breath freshening spray try Retardex Oral Spray, £2.65 for 8.3ml from chemistdirect.co.uk. “It’s designed to eliminate and not just mask odours and is the only thing I have found that immediately cures garlic breath,” she says.

One thought on “Ask the Guru: How do I beat bad breath?”