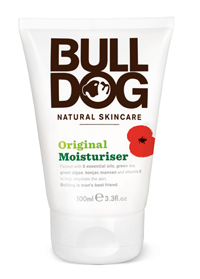 I’ve said on many occasions and in many publications that Bulldog’s Original Moisturiser is one of my all-time favourite moisturisers. It may be inexpensive but don’t let the price fool you – it’s an excellent and effective moisturiser that I often use myself. Plus, it’s animal-friendly and British! And this hero product just got even better by helping some real heroes.

In support of this year’s Poppy Appeal special packs bearing the red poppy have been produced and for every one you buy Bulldog will donate a whopping 25p to The Royal British Legion. Puts some other brands to shame doesn’t it?

Bulldog is available from Boots,  leading supermarkets and online at www.nivenandjoshua.com